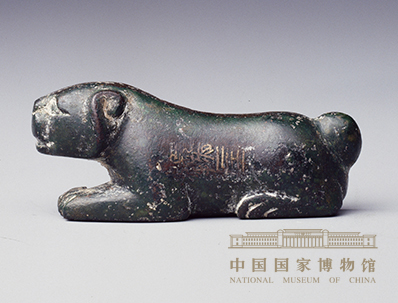 The use of bronze tiger-shaped tally for dispatching troops dated from the September of the second year (178 BC) of the Emperor Wen's reign of Western Han. A bronze tally was divided into halves, the right half was kept in the capital and the left half was isssued to each prefecture. When the central government wanted to dispatch troops to into battle, it would send an envoy carrying the right half to the prefecture. The prefect must verify that two halves could combine into one piece, before the military oder took effect. Shown here is the left half of a tiger-shaped tally, which was issued by tge Western Han government. On the left side of the tiger's body are 4 characters inlaid with silver meaning that "Zhangye, the left one." On its back is the left side of 8 characters meaning that "Tiger-shaped tally issued to the Prefect of Zhangye."