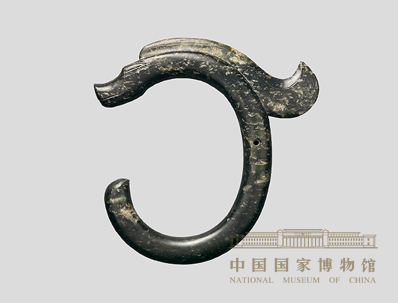 The jade dragon is carved from dark green Xiuyan jade. The body is smooth and clean. On its head are long snout and thin eyes.The mane is floating, and the body curls like a hook. Vivid in shape and exquisitely carved, it has the reputation of “China’s No. 1 Dragon”.

Many relics in the Neolithic Age contain dragon-like remains, either Bang Su (sculptures inlaid with clamshells), coloured paintings, or sculptures. Regarding the prototype of the dragon, researchers have put forward various hypotheses, such as snakes, crocodiles, lizards, fish, salamanders, horses, cows, pigs, deer, bears, tigers, silkworms, grubs, pine trees, clouds, lightning and so on. Both the word “Long” (dragon) in the oracle bone inscriptions of the Shang Dynasty and the jade dragon unearthed from the Fuhao Tomb show that the dragon is a giant, horned, big-mouth, and curved-body mystical creature. Among the cultural relicsof the Neolithic Age, those most in line with these characteristics contain the curly jade dragon in Hongshan Culture.Similar images of jade dragon also appear in Lingjiatan in Hanshan County, Anhui Province and “Xiao Jia Wu Ji” (Ridge of Xiao’s Family) in Tianmen City, Hubei Province. They may be the original forms of dragon.

There are different opinions on the origin of dragons, such as lizards and crocodiles. It is said that the dragon head origins from horse head, cow head or pig head. This jade dragon is one of the earlier images of dragonthat has been discovered in China. For the characteristics of its head, there is a long snout, a protruding nose with an upturned edge. The end is truncated and has two side-by-side nostrils, seeming to have the characteristics of pig head. This jade dragon is made of black and green jade and has a very high artistic value.