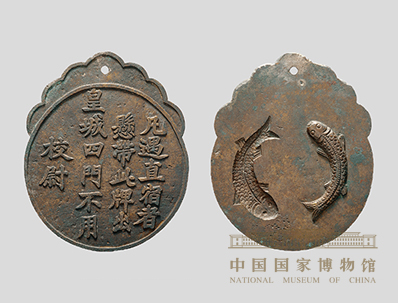 The copper tally is rectangular with a hole in the middle. On upper part is cambered, under the camber is decorated with crouching animal designs. The front side cast two seal characters cut in relief with the meaning of guard. The left side cast nine characters cut in intaglio means that brave guard Nr. 2320. The back side inscribed with sentences written in regular script "Every guard must wear his copper tally. According to the law, those who do not carry it, those who borrow it and those who lend it shall be punished in the same way." This tally is exclusively for the use of Nanjing Imperial City guards during the early Ming Dynasty, which indicates the establishment of its political power.