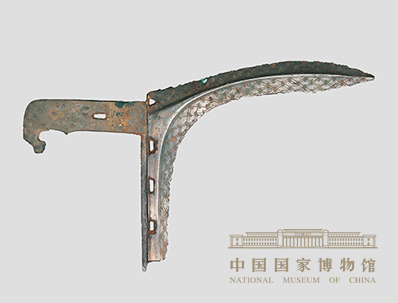 The blade of this Ge is slightly raised, and the back slightly bugles in a long arc shape. Its end is straight, with a downward hook-shaped tail. Three rectangular holes are arranged along the stem of the later Ge. One triangular hole is on its banister, and one rectangular hole on the end of the Ge. On the blade and the stem are decorated with lozenge patterns formed by double lines, adorned with dots where the lines cross.

According to research, this exquisite pattern on this Ge is created through special processing with copper sulfide. After such treatment, the weapon is not only beautiful but also anti-rust, reflecting the superb casting technology of ancient China. The double-line lozenge pattern on this Ge is a typical decoration on weapons of the states of Wu and Yue. In 473 BC, Wu was conquered by Yue, and in 333 BC, Yue was conquered by Chu. After that, this area was completely controlled by Chu. During the Warring States period, Chu, Wu and Yue were always adjacent to each other. Therefore, the exquisite weapons of Wu and Yue may flow into the Chu region. This is also one of the reasons why more Wu and Yue weapons were unearthed in the Chu cultural area during the Warring States period.

According to reports, two pieces of this Ge were unearthed at that time, and they may be a pair. Due to the exquisite production, the user may not be a general soldier or a junior officer, but probably a senior general.