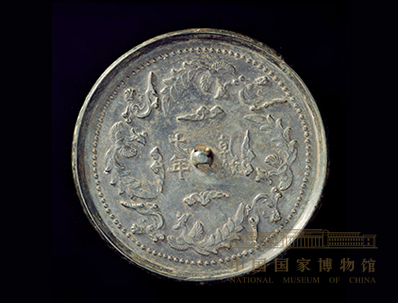 On the back of the bronze mirror, there is a button in the middle. The button is decorated with four auspicious clouds, a phoenix and a flying dragon. The mirror is surrounded by bead patterns at the edge. In addition, the words "Qian Tong Qi Nian" and "Du You Yuan Guan Ya" are inscribed on its surface. The word "Qian Tong Qi Nian" indicates that it was made in the 7th year of Qiantong Reign (1107 AD). The inscription "Du You Yuan Guan Ya" states that it was made under the supervision of feudal official in Liao Dynasty.