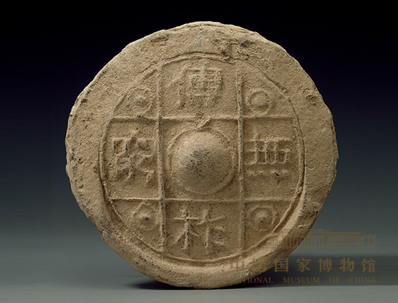 The front of the eaves tile is divided into nine squares, in each of which one of the four Chinese characters “Chuan Zuo Wu Qiong” is written. The four characters on the eaves title express the wish of the Northern Wei rulers to perpetuate their rule eternally. This tile may be used by the palace or Imperial Ancestral Temple in the capital, Pingcheng, of the Northern Wei Dynasty at that time.

Pingcheng is one of the capitals of the Northern Wei Dynasty and is located in the northeast of Datong, Shanxi. In 398, Tuoba Gui moved the capital from Shengle (now Tuchengzi in northwestern Inner Mongolia and Linger) to Pingcheng. After the Xianbei people led by Tuoba family moved to the capital Pingcheng, the Xianbei people moved into the Central Plains from the farming and animal husbandry junction. After nearly 100 years of management, Pingcheng became the political, military, economic and cultural center of northern China, laying the foundation for Xianbei people led by Tuoba family to conquer the Central Plains.