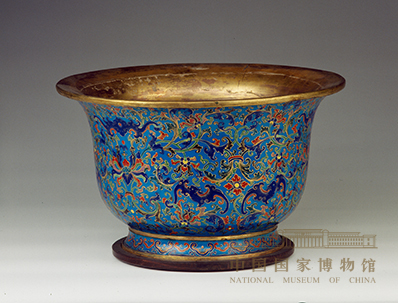 The process of making objects of this kind is first to make a copper body and then apply enamel glaze on the surface. The technique of making copper body enamelled objects saw unprecedented progress during the Kangxi, Yongzheng and Qianlong reigns of the Qing Dynasty. The bowl shown here is decorated with a bat-and-lotus design, one of the traditional auspicious designs in China. The Chinese character for “bat” has the same pronunciation as the one for “happiness”; and the lotus, which emerges unstained from mud, is regarded as a noble plant. The Chinese character for it has the same pronunciation as the character for “unbroken”. Thus the bat-and-lotus design implies unbroken happiness.