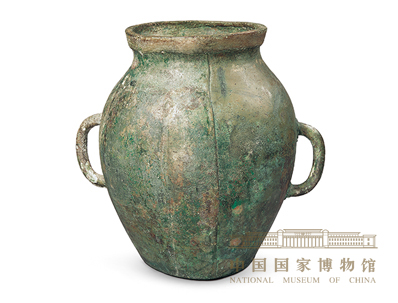 On the body of the measuring device is an inscription of 9 lines, recording Zihezi’s promulgation of standards of volume. The gist of the inscription is: “Zihezi has ordered that Chen De be informed to the following effect: The granary fu shall be the standard unit for all fu measures, and the granary half-sheng (sheng, a traditional unit of measurement) the standard for all zhi measures. If any official attempts to cheat, he must be stopped. If he does not stop, he shall be punished according to the seriousness of the offense.” Zihezi was the official title of Tian He when he was a senior official of Qi during the early Warring States period. He was made a vassal lord by King An of Zhou in 386 BC. As this fu was cast before that occurred, it must have been cast sometime between 404 and 385 BC. It is a typical measuring device of the Warring States period and shows that the state of Qi had a strict system of measures at the time.

This bronze cauldron has a flat bottom and a pair of handles on the belly. It is a measure of the early Qi State in the Warring States period. It is collectively referred to as the “Chen’s three measures” with the “Zuoguan” bronze Huo and “Chenchun” bronze Fu collected by the Shanghai Museum. There are nine lines of inscription on the belly of the bronze Fu, which records the reference standard of its capacity. Zi Hezi refers to Tian He, the senior official of the Qi State in the early years of the Warring States period, who later replaced King Kang of Qi as the monarch of the Qi State.