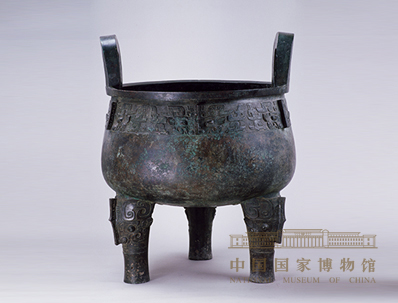 This bronze ding (food container), known as the Da Yu ding, was excavated in the early Daoguang reign (1821-1850) of the Qing Dynasty in Licun Village, Meixian of Shaanxi Province. It was successively owned by local squires the Guos, county magistrate Zhou Guangsheng, ZuoZongtang and Pan Zuyin, and was gifted to Shanghai Museum by Pan’s descendant, Ms.Pan Dayu in 1951. It was later collected in the National Museum of Chinese History (today’s National Museum of China) in 1959. Originally there was another bronze ding (the Xiao Yu ding) also casted by Yu, which was smaller than this piece, with its inscription recording the conflict between the Western Zhou Dynasty and Guifang. However, it became lost in transit and only the rubbing of its inscription survives.

This bronze ding has a relatively thick wall, a pair of upright and slightly flared handles, a wide flat edge with a protruding rim, and an inward-folding mouth. Below is a wide and drooping belly with a slanting extended wall, which has a small curvature at the outer bottom near the three cylindrical legs. The body is decorated with a lightning cloud design as the base, with banded tao-tie patterns on the neck and relief tao-tie patterns on the legs, and two underlying circles of protruding patterns. It is a famous treasure of the early Western Zhou Dynasty, known for its imposing and dignified modeling.

The inner inscription has 291 characters in 19 lines, recording that King Kang of the Western Zhou Dynasty conferred a title on Yu in the 9th month of the 23rd year of his reign. From the 1st line “The King speaks to the following effect” to the 7th line “so they ended up losing their kingdom,” King Kang shares with Yu the lesson that King Wen and King Wu were diligent, but the myriad bureaucrats at the Yin interior extravagantly indulged in wine and brought about the fall of their state. It was recorded in the Records of the Grand Historian: Annals of Yin that King Zhou of Shang indulged in wine and lewdness and even “bathed in wine.” The Book of History: Weizi recorded that King Zhou’s elder brother Weizi also said that King Zhou “indulged in wine.” The Book of History: Announcement about Drunkenness was written by Dan, Duke of Zhou, to warn his younger brother Kang Shufeng who was given a fief centered on Zhaoge, the capital of the Shang Dynasty. This book contained a statement reading, “but he (King of Zhou) gave himself up to drink, not thinking of restraining himself, but continuing his excess, till his mind was frenzied, and he had no fear of death. His crimes accumulated in the capital of Shang, and though the destruction of the dynasty was imminent, he was unconcerned.” This is consistent with the statement from the 5th line to the 7th line of the Da Yu ding, “I heard Yin violated the command; it was because the lords and officials at the Yin frontiers as well as the myriad bureaucrats at the Yin interior overly indulged in wine and thus ended up losing their kingdom,” revealing that the Zhou people had learned from the cautionary tale of the bureaucrats of Shang who lost their state due to their indulgence in wine. From the 7th line “You are yet unenlightened but have greatly served me” to the 13th line “Day and night, assist me, the one man, to govern over the four quarters,” King Kang appointed the task to Yu and instructed him to follow in his ancestor’s footsteps and serve the king. From the 13th line “For me, you will inspect the territories and people that the former kings had received” to the 18th line “The king said, ‘Yu, act respectfully and properly, do not disregard my command,’” King Kang encouraged Yu to devote himself to his duties and awarded him sacrificial wine, clothing, carriages and horses, servants, slaves and men under his command. From the 18th line to the 19th line, the sentence “In response to the exaltation by the King, Yu herewith made this treasured cauldron of the ancestor Duke of Nan” describes how Yu eulogized King Kang and made the Da Yu ding.

The opening words “It was the ninth month” and the concluding words “It was in the twenty-third year of the king’s reign” from the Da Yu ding mark the time when the maker Yu was appointed. This dating method was based on the reign year of the king and was placed at the end of the chapter, which was the chronological formula of inscriptions on ancient bronze objects during the early Western Zhou Dynasty, having been inherited from the Yin system.

The whole chapter of the Da Yu ding is well structured in two paragraphs, which established the norms for the arrangement of long-text inscriptions. The characters are foursquare in varied font sizes and strokes, and there are many round and square blocks in characters like “王”, “在”, “正” and “土”, which are quite pictographic. Compared with examples from the late Shang Dynasty however, the nastroke (one of the calligraphic strokes needed to writeChinese characters) in characters like “有”, “厥” and “又” in the inscription are more distinct, forming the unique, imposing and dignified calligraphic style of the early Western Zhou Dynasty.