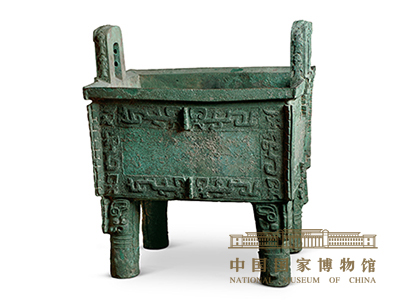 The Hou Mu Wu bronze square ding (formerly known as Si Mu Wu ding) is huge, majestic, and weighs 832.84 kg. It is currently known as the heaviest bronze ware in ancient China. The inscription on the inner surface of the belly of the device is “Hou Mu Wu”, which is the temple title of Shang king's mother.

The body and four feet of the Hou Mu Wu bronze square ding are cast as a whole, and the handles are cast with molds later. Casting this ding requires more than 1,000 kg of metal raw materials. There are a series of complicated technical problems in making such large-scale artifacts in the process of modeling clay molds, remaking pottery molds, and casting with composite molds. The casting of the Hou Mu Wu bronze ding fully shows that the bronze casting in the late Shang Dynasty was not only large in scale, but also tightly organized and well-divided, which was sufficient to represent the highly developed bronze culture of the Shang Dynasty.

In addition, the qualitative spectrochemical analysis and quantitative analysis by the precipitation method of chemical analysis showed that the Hou Mu Wu bronze ding contains 84.77% copper, 11.64% tin, and 2.79% lead. The proportion of copper and tin is basically the same as which is recorded in “Kao Gong Ji: Zhu Shi” (Book of Diverse Crafts: Casting), which shows the internal inheritance of ancient bronze civilization in China. (Writer: Yu Chenglong)