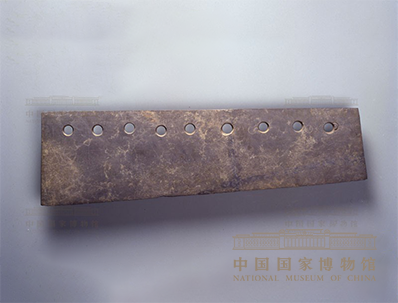 This stone knife is rectangular with a thick back and thin blade, clear edges and corners. Its whole body is finely ground and has a standard shape. The edge of the blade is slightly wider and relatively straight with some traces of use. There are nine round holes on the side near the top of the back, which are evenly distributed in a line with similar diameters and obvious drilling traces.

The Xuejiagang culture is named after the Xuejiagang site discovered in Qianshan, Anhui Province in 1979. It is mainly distributed between the Yangtze River and the Huaihe River areas to the east of the Dabie Mountains and the west of Chaohu Lake, and expands to some areas of eastern Hubei Province and northern Jiangxi Province. The stone tools of the Xuejiagang culture are generally ground, and in addition to common tools such as axes, yue (battle-axes), ben (adzes), chisels and zu (arrowheads), the rectangular perforated stone knives are particularly distinctive.

The holes drilled on the perforated stone knives generally come in odd numbers. In addition to stone knives with nine holes, there are also specimens with one hole, three holes, five holes, seven holes and 13 holes. Only one perforated stone knife has been discovered with an even number of holes. These holes may have been used to pierce, tie and bind the handles. Some of the larger stone knives have flower and fruit patterns or decorative red ribbons near the holes, with a neat and tidy composition. As for the purpose of this perforated stone knife unearthed at the Xuejiagang site, some experts think it is a harvesting tool for crops based on the traces of use on the stone blade; some think it is a kind of ritual vessel given its exquisiteness; some think it is a weapon used in hand-to-hand combat based on its slender and huge shape; some also think it is a shed stick used to beat down layers of fabric.