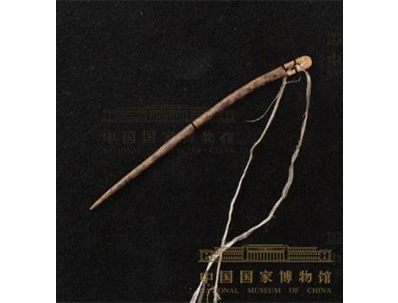 What remains of the needle is 8.2 cm long. The diameter of the eye, made by scraping and piercing with a pointed tool, is 0.31 to 0.33 cm in length. This is one of the earliest bone needles discovered in China. It is in fairly good condition, although a part of the eye is missing. The needle point is very sharp too, but there are scratches on the surface. From this needle we may infer that Upper Cave Man had learned how to make clothes from animal skins and tendons. In 1983, three well-preserved bone needles were unearthed at Xiaogushan, Haicheng, Liaoning Province. The longest measured 7.74 cm and was about 30,000 years old. Though dated earlier than Upper Cave Man, the technique involved in its production is superior. The eye was made by grinding the head of the needle until it was quite thin, then piercing it from opposite sides.