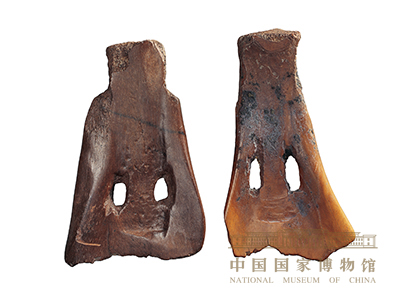 These two bone spades are ancient farm tools, called bone si in ancient China. They are made of cow scapulas. The joint part of the scapula is filed smooth and flat, a longitudinal shallow groove is cut in the middle of the bone plate, and a hole is cut at the lower end of the groove on the left and right to tie the wooden handle.

Si are shovel-like tools generally made of wood. As the wood decays easily, wooden si are rarely found intact today. The edges of these bone si are greatly abraded, and agricultural experts believe they are farm tools used by the Hemudu people in paddy fields, mainly for leveling, digging ditches, diverting water and draining the land. In recent years, archaeologists have also discovered that bone si may have been used to dig deep ash pits and column holes, which is also closely related to the construction of stilt houses.

The discovery of a large number of bone si indicates that rice farming at the Hemudu site was very mature, having completely moved beyond the more primitive slash and burn technique. While bone si were different to the later hoe, they were used to level paddy fields and repair ditches. Therefore, farming with si as the main tool is called "si farming," which is a form of hoe farming.