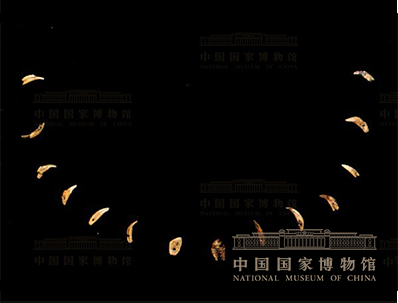 These perforated animal teeth are ornaments. Altogether 125 of these pierced teeth were discovered in the same cave, most of them canines of badgers and foxes. There were also the teeth of deer, weasel and fitchew, as well as a single tiger's tooth. Each tooth has a hole pierced through the root, made by digging and scraping with a sharp tool. When unearthed, five of the teeth were found arranged in a semicircle. Along the sides of some holes were vestiges of red iron ore, suggesting that the material used to string the teeth had been stained red. From this we may speculate that Upper Cave Man wore pierced teeth around the neck like beads, indicating that these primitive humans had a certain amount of aesthetic awareness. They may not have worn such ornaments for beauty alone, however; the wearer may have wanted to show off his prowess as a hunter.