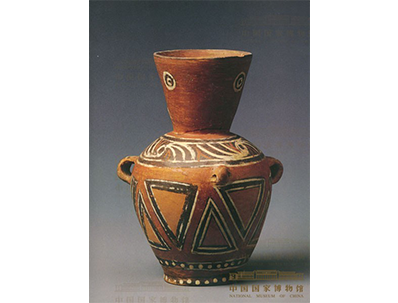 This painted pottery jar is red with a high neck, handles, round belly and flat bottom. Its belly is very distinctive, bulging on one side and flat on the other. There are two annular handles symmetrically set on each side of the belly and a small nose-shaped button with a horizontal perforation on the middle part of the bulging side opposite to the flat side. The surface of the jar is glazed with colors and gorgeous patterns. It was first glazed in black with basic patterns, while the outlines of the black patterns were later drawn in white or embellished with white dots. The design is divided into several parts from top to bottom, forming different patterned bands. The band at the top is located on the outer edge of the mouth, including three equidistant circles glazed in black and white. The band on the shoulder is a frame composed of two parallel lines and filled with several black and white swirly patterns. The belly is decorated with large triangular patterns which are staggered in opposite directions to form a continuous band. The bottom is painted with two horizontally parallel bead patterns, both of which have white spots added on the black painted layer, forming a sharp contrast.

As water containers unique to the Dawenkou culture, pottery jars could be used to hold or draw water. Fixing the vessel to one’s back, one could safely walk without fear of spilling its precious contents. One side of its belly is processed into a flat shape, which enlarges the area in contact with the human body. This not only improves its stability but also prevents its bulged belly from pressing uncomfortably into its wearer, thus it is innovative in terms of its practicability and comfort. The pottery jars of the Dawenkou culture are mostly red pottery and their surface is generally uncolored without decoration. This painted pottery jar with handles was discovered in a tomb. It is small in size and gorgeous in appearance. Evidently it was not designed for practical use, and it may have been a specially made burial object.