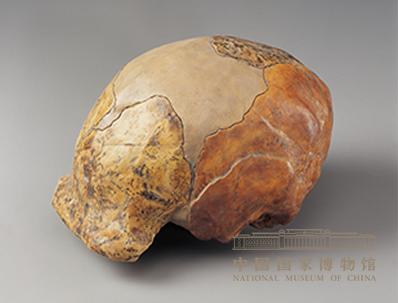 Fossils attributed to Peking man are numerous. From 1927 to1937, fossilized remains of upright-walking hominids discovered at this site included skulls, lower jawbones, teeth, thighbones, humeri, collarbones and semilunar bones. Most of these fossils, however, were lost during World War II and have not been accounted for. Excavations since 1949 have yielded more skulls, mandibles, teeth, humeri and shinbones, belonging to over 40 individuals. The skull of Peking man is similar to that of an ape, with low flat parietal bones, a backward inclining forehead and thick brows. According to archaeomagnetic dating, Peking man lived at this site between 200,000 and 700,000 years ago. The fossils of over 100 animals, including the zokor (Myospalax tingi), flat-antler deer and thick-jawed deer, a number of plant fossils, tens of thousands of stone tools and numerous vestiges of hearths were discovered at about the same time as the fossils of Peking man. From these relics we may infer that the region where Beijing is now located was warmer in ancient times than it is today, and that Peking man's cave was in an area of forests, grasslands and flowing water. They lived a primitive, simple life, made stone tools, gathered wild plants, hunted wild animals and roasted meat over open fires.