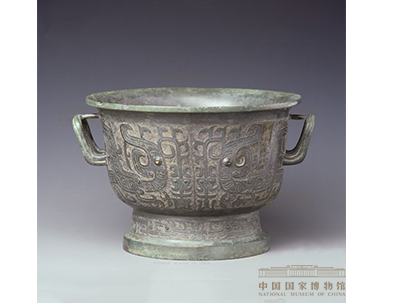 It is near impossible to determine the number and names of all the vassal states established via the enfeoffment system of the Zhou Dynasty. Yet unearthed cultural relics can prove the existence of some vassal states that had a great influence on later periods, such as the states of Jin, Lu, Qi, Yan, Chu and Qin, despite having existed at different dates and under different names.

The State of Yan was an important vassal state enfeoffed in the area of present-day Beijing in the early Western Zhou Dynasty. In the inscriptions on the bronze ware, the State of Yan is represented by the Chinese character “匽”. The “Yan Hou” Bronze Yu, cast with the inscription “匽侯作饙盂”on its inner wall, was a bronze ware made by a duke in the early Yan. It was unearthed at Kazuo, Liaoning Province, indicating that the early Yan had a wide-reaching influence which had extended beyond the northern edge of the North China Plain to the Liaohe River Plain.