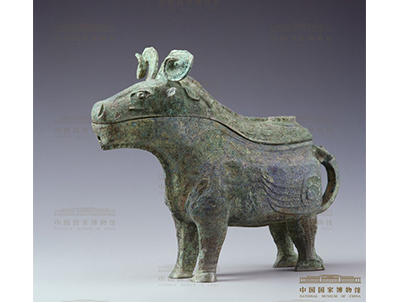 The bronzes commonly called "gong" have an oval-shaped belly, ringed base or four feet, short peaked spout in the front and a handle in the back, while all gong have a beast-shaped cover. Bronze gongs were prevalent from the late Shang Dynasty to the early Western Zhou Dynasty, yet they remain extremely rare because they were made from different materials and bore unique individual characteristics.

"Hou Mu Xin" bronze gong, so named because of the inscription "Hou Mu Xin" cast inside the cover and on the bottom of the container, is one of the precious bronze wares excavated from Fu Hao's Tomb. (By Huang Yi)