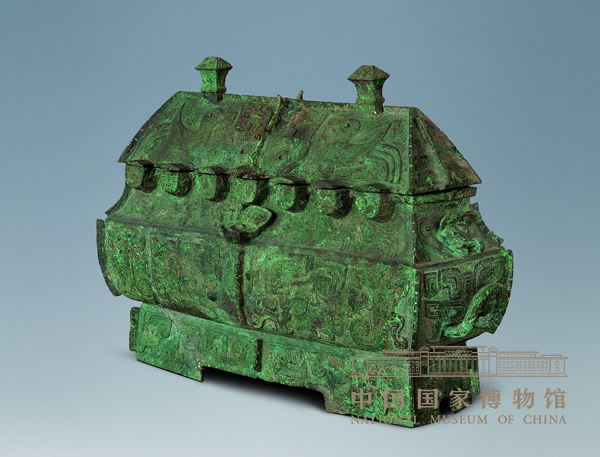 The vessel is composed of two parts, the body and the cover, which together resemble the combination of two fangyi. The body is rectangular, with a slightly converging mouth. There are seven square grooves on one side of the long edge of the square lip and seven pointed grooves on the other side. The shoulders are concave and arc-shaped. The abdomen is rectangular with a hollow body cavity, the two ends are attached to the ears, and the lower part of the abdomen is slightly retracted. There is a gap in the middle of the four sides of its round feet. The four sides of its body, the middle of its round feet, and its four corners are all set with flanges. The cover is in the shape of a hipped roof with symmetrical hipped short column knobs at both ends. The middle ridge, the four sloping corners and the middle of the four sides are all set with flanges. There are seven square lids on one side of the long edge and seven pointed lids on the other side, which fit perfectly into the slots on the body of the vessel. The entire vessel is covered with cloud and thunder patterns and decorated with bird patterns, kui dragon patterns, taotie patterns and triangle patterns, making it exceptionally gorgeous. The inscription “Fu Hao” is cast in the middle of the inner base of the vessel.

This vessel is solemn and elegant. With the cover on, it resembles a palace with 7 square grooves arranged neatly like house rafters, which is likely modeled after the large palace buildings at that time.