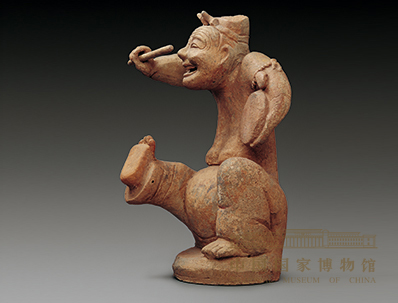 This ceramic figure wears a headband with an ornamental design on his forehead, has a bare chest and belly, shrugs his shoulders and wears trousers with bare feet. He holds a flat drum in his left arm and a drumstick in his right hand, as if poised to beat the instrument. He laughs merrily in a humorous manner and with exaggerated movement, as if a living comedian is performing.

The comedians in the Han Dynasty primarily used humorous, farcical and satirical performance styles to entertain their masters and audiences. They usually attended upon their masters and performed improvisations by beating their drums while singing. It was popular among the royal family, aristocrats, the powerful and wealthy officials to raise comedians at that time, as evidenced by the following historical records. Emperor Wu of the Western Han was said to have been “attended upon by comedians all the time,” while Prime Minister Tian Fen was said to “appreciate comedians and craftsmen.” Huan Kuan’s Discourses on Salt and Iron: Luxurious Life Leading to Insufficiencies says that “the rich people worshiped famous mountains. During sacrificial ceremonies, people hammered oxen while the comedians beat drums and performed.” Diminutive performers with bare upper bodies and comical movements were often seen in the stone carvings of the Han Dynasty, accompanied by music, dance and acrobatics. Many ceramic figures with similar images have also been excavated from tombs of the Han Dynasty, which all reveal the popularity of comic performances at that time.

Storytelling performances in the form of narrating and singing were widely enjoyed by the common people in the Han Dynasty. This ceramic figure is an outstanding sculpture with a distinctive folk flavor and local style. A number of similar ceramic figures have also been excavated from tombs of the Eastern Han Dynasty in Sichuan Province, indicating the popularity of such storytelling performances in Sichuan.