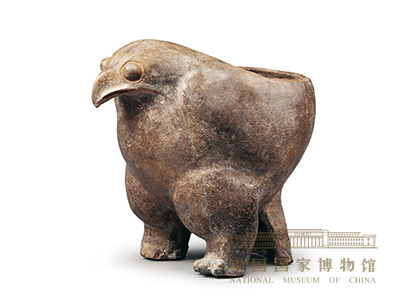 This pottery ding adopts the shape of an eagle standing on its feet. The eagle has a sturdy body and strong legs. The wings are closed against the body. The tail sags to the ground and forms three stable fulcrums with the two legs. The eagle’s eyes are wide open, the beak is hook-shaped, looks strong. The structure is simple, majestic and powerful, which shows a strong artistic tension. The mouth is set on the back between the two wings. They are tightly combined as if the eagle bears the ding on its back. This arrangement subtly blends the characteristics of ding-shaped artifact with the animal beauty of the eagle.

The eagle-shaped pottery ding is an example of the perfect combination of primitive art and practical functions, and is a rare sculpture art treasure in ancient times. Yangshao culture is famous for its exquisite colored pottery. The presence of this pottery shows that people at this time were not only good at creating painted patterns, but also had strong capability in plastic arts. The eagle-shaped pottery ding was unearthed in a tomb of a female adult. Other artifacts were excavated along: there were more than a dozen bone daggers, several pieces of stone gui (ritual artifact), stone axes, and a batch of living utensils. Stone Gui, bone daggers and other items are usually used as ceremonial utensils. This eagle-shaped pottery ding was placed in the same tomb-chamber as them. Considering its unusual form, this ding may be related to the sacrificial activities at that time.

The earliest ceramic sculptures in China appeared in the sites of Peiligang and Hemudu in the early Neolithic period, about 7000 to 6000 years ago. Early ceramics had a wide range of subjects, including pigs, pig heads, sheep, and portraits, but they were generally small and simple. The production was rather rough. Some may be children’s toys, and some may be related to sacrificial activities. By the end of the Neolithic Age, the shape of the pottery was large, and the design combines aesthetic and practicality. Examples are the eagle-shaped pottery ding of Yangshao culture, the pottery gui (cooking vessel) of Dawenkou culture, and the sea-beast-shaped hu (water container) unearthed at the Meiyan site, etc. (Writer: Yu Lu, Wang Yueqian, etc.)