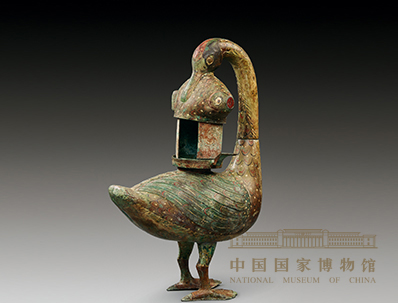 Painted Bronze Lamp in the shape of Goose Carrying Fish

Lamps made in the Han Dynasty are diverse in form, for example, wild goose foot, the Vermillion Bird, ox and sheep and other auspicious patterns. This lamp is in the traditional artistic form of a standinggoose with its head turned back and holding a fish in its beak. The whole lamp ismade of four sections, namely the goose head and long neck with fish in beak, the body, the lamp tray and the lamp shade.The goose has a plump body with two wings on both sides, a short upward tail and two webbed feet.The lamp tray has a handle on the back of the goose, and the lamp shade is composed of two curved plates. The tray and shade can be opened and closed by turning, which serves not only as a windshield, but also to adjust the brightness of the light. The fish body, the goose neck and its body are hollow and connected to hold the fumes. All parts are dismountable for cleaning. Such ingenious design makes it a perfect combination of function and form and a piece of rare art treasure.

This kind of lamp furnished with smoke tunnels was a newly created lamp in the Han Dynasty. It was often made in the form of human shapes, animals or implements.The smoke tunnels were either single or double, which could channel the smoke into the belly of the lamp to reduce soot and keep the room clean.The patterns of water birds catching fishes appeared on painted potteriesearly in the Neolithic Age. Lamps with such design in the Han Dynasty have been excavated in Shenmu, Shaanxi Province and Xiangfen, Shanxi Province, indicating that such traditional images were still popular at that time.