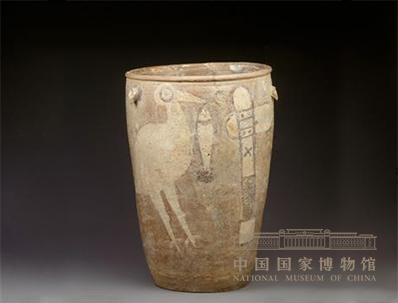 Painted pottery jars were used for holding human remains in Yangshao culture. They are also known as "Yichuan jars" because most of them were unearthed near Yichuan County, Henan Province, and were mainly used for the burial of adults. The painted design of this pottery jar is colourful and complex in composition. It is generally believed that this pottery jar is a burial device for the clan leader. The combination of a totem image and weapon was typically painted on leaders' burial urns to express important historical events and commemorate their heroic deeds.(By: Wang Yueqian)