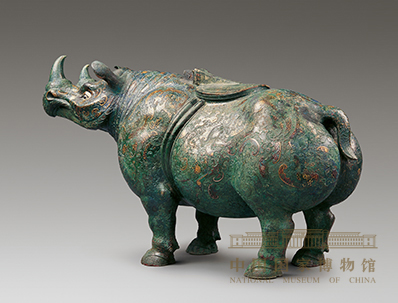 There are many examples of animal-shaped wine vessels in ancient China, such as ox-shaped Zun, elephant-shaped Zun, and pig-shaped Zun among the bronze wares of the Shang Dynasty, and horse-shaped Zun, rabbit-shaped Zun, and Duck-shaped Zun among the bronze wares of the Zhou Dynasty. In the Han Dynasty, Zun imitating animals was not very popular, but it was still loved by people. This bronze Zun adopts the shape of a rhinoceros. The rhinoceros stands with its head up. It is muscular, with accurate proportions, in a strong posture. It represents the image of the Dicerorhinus sumatrensis that lived in ancient China.

This Zun is shaped like a rhinoceros. The rhinoceros stands, with its head up. Its body is full and round, its legs short and thick, its skin thick and wrinkled, its horns sharp, and its eyes inlaid with black beads. The belly is hollow and used to hold wine. On its back, there is an oval mouth with a lid. On the right side of the mouth of the rhinoceros, there is a round tube “Liu”. The whole body is decorated with gold and silver cloud patterns as thin as a hairspring, which is shining and gorgeous.

In ancient times, China not only had rhinos, but also had a large number of them. Rhinoceros bones have been found many times in the Neolithic sites. The oracle bone inscriptions of the Shang dynasty records about burning forests to hunt rhinoceros. Rhino-armour made from rhinoceros’ skin was very admired by warriors in Spring and Autumn Period. Due to the large-scale of hunting, rhinoceros, a wild animal with low fertility, had been rapidly reduced in the north. It disappeared in the Guanzhong area (now the central Shaanxi plain) at the latest by the late Western Han Dynasty. When Wang Mang assisted the government, he offered valuable gifts in exchange for live rhinoceros in the Huangzhi country in South China Sea.

The whole object is decorated with inlaid gold and silver cloud patterns, which are exquisite and gorgeous. Although it is a national treasure with practical use, it is full of vitality. It is an exceptional artifact among the bronze wares of the Han Dynasty.