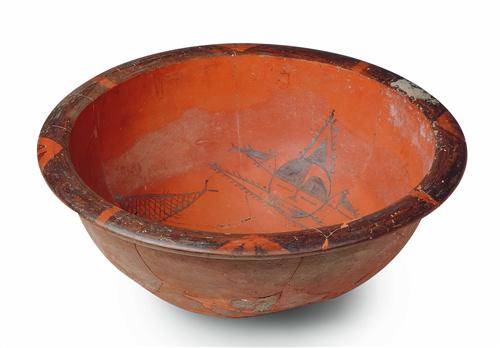 Basin with a fish pattern with a human face

This is a treasure of the Neolithic. Made from fine red clay it has a wide lip and, on the inside, black painted decorations of two opposing faces and two fish. The faces are circular with arch-shaped black areas on the forehead, on the right side, possibly a local facial tattoo tradition. The straight nose and the eyes depicted by thin straight lines give it a serene appearance. The open mouth is formed of the heads of two fish, their bodies extending either side of the face, and the ears are also depicted as small fish, creating a peculiar merman-like form. It shows great imagination. On its head is a triangular-shaped object, possibly a depiction of hair, but also with the appearance of the fin of a fish..

Many of the pottery basins found at Banpo have a fish and net design, which probably have both an economic and a totemic significance. The Banpo people lived in terraced settlements in a river valley, dependant on agriculture but with hunting and fishing as a supplement. The unusual headdress most probably represents that worn during a religious ceremony, where the human was believed to transform into the spirit of the god – a fish god – hence the fish fin hat. It suggests that the people of Banpo used fish as a totem.