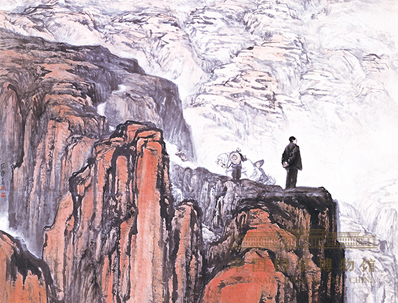 This work was created for the 10th anniversary of the People’s Republic of China. The painter pioneered in presenting a revolutionary and historic theme in the style of traditional Chinese landscape painting. By adopting indirect portrayal method, Shi tells a story in the magnificent landscape surroundings of northwest China, inviting the viewer into a specific historic background. Although no army is present in the painting, a grander historic scene is implied in the huge mountains and valleys.

To handle the space, the painter combines high-clear style and profundity touch to embody the heroic ambitions of Mao Zedong. The former is adopted in the short-range view: a monument-like composition of the awesome mountains and the dark colour suggest a sublime background that reflects Mao’s great talent and bold vision. The vertical lines of the mountains overwhelm the dark colour and are intercepted by horizontal lines long or short that somewhat curb such a rush-up trend. In such manner, a profound power about to set off is accumulated among the mountains; the standing figure of Mao in the middle forms an uninterrupted vertical line. All of the accumulated rush-up power finds its way here to burst out; although the room for the figure is limited, it is for this powerful man only. The figure is posing toward the right of the frame and toward the outside of it, extending the trend within the painting to the broader outside world and forming a majestic drive. The long-range view adopts the profundity-style composition that develops from the dark to the light and back to the dark, extending the frame boundlessly further and creating a vast artistic conception. Such combination exists in a horizontal and vertical space, using a limited frame to bring out an unlimited artistic vision and giving the work enormous vigour.（Feng Linggang）