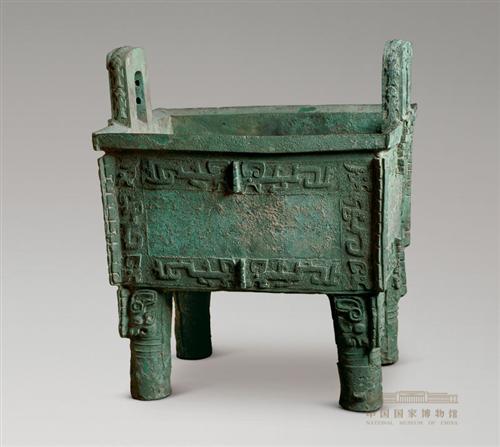 This piece, which was called Simuwu, is a rectangular vessel with a protruding rim and thick square lip. It has two large upright arched handles, one of which has been replaced. The cauldron has straight sides, a deep belly and a flat base, and four hollow cylindrical feet. There are shallow flanges on the face and corners of the body. The top and bottom of the body bears an animal face design with a coiled tail; there are animal faces and one-legged dragon designs on the four edges with a base design of clouds and thunder. The design on the outer part of the handles shows two facing tigers with a human head in their mouths, with fish on the edges. The upper part of the feet bear an animal face, with a three-cord design below.

Three characters are inscribed on the inside of the body: ‘Hou mu wu’, written in a vigorous and robust script, with full shape and strokes which taper into points at their ends but are full in the middle. ‘Mu’ was the posthumous name of Fu Hao, consort of the Shang king Wu Ding. Her tomb is the best preserved of the Shang royal tombs, containing over 400 bronzes. The vessel was made on order of Fu Hao’s son, also a Shang king, to carry out rituals for his mother (mu) – her surname was Wu. An alternative name is the ‘Houmuwu’ ding. It is substantial and powerful yet remains elegant with a beautiful design, showing a superb level of casting, and is the largest Shang ritual bronze vessel found to date. (Su Qiang)