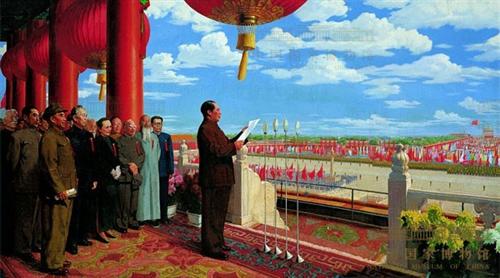 The birth of this masterpiece of The Founding Ceremony coincided with the Novo New Year’s Painting Movement that started in 1949. By absorbing new elements popular of the time in traditional Chinese New Year’s paintings, Dong makes a success in presenting a grand historical event in a vivid style. In this painting, a joyful festive atmosphere is created through the red carpet, columns, lanterns and flags on the Tian’anmen Square. The colour red also symbolizes ceremonial sublimity, which effectively supports the grand theme of the founding of a country. The pure colour, which is in sharp contrast with the grey tone of traditional Western paintings, and patterns on the carpet, lanterns, columns and guardrail, which are metaphoric of typical cultural symbols, work together to form a style for oil painting with typical Chinese elements.

In efforts to create images for each historical figure, the painter referred to extant photographs and turned images in a strong light contrast into art images in mat gloss, so as to achieve a harmonious effect in the painting. Dong also borrowed techniques used in Tang-Dynasty Dunhuang murals, ancient Chinese figure paintings and Ming-Dynasty portraits. He makes an excellent presentation of Chinese political leaders in both appearances and quality.

The Founding Ceremony is undoubtedly one of the most influential works on significant historic events. As commented by the artist Jin Shangyi, this work not only met political needs of the time, but also skillfully embodies the painter’s inner world and his artistic pursuit.（Feng Linggang）